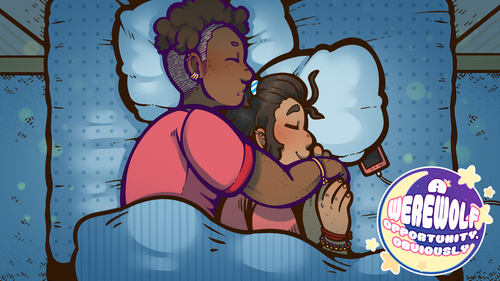 Hey, everyone. Thanks so much for all of your support and enthusiasm over the past year! It's meant more than I could possibly put into words to see how much people enjoy what I'm doing -- but today, I unfortunately have some bad news.

There's no delicate way to build up to this that doesn't feel cheesy, at least to me, so here's me ripping the bandaid off right away:

I'm putting AWOO on the backburner for now and saying that there's no scheduled release date for it at this point in time.

This doesn't mean we're cancelling the actual release overall or even really putting it on hiatus -- it's still going to be very much in development, with new assets being produced regularly -- but we're definitely not going to be launching on July 13th, when we thought we would. We're moving at a much slower pace, and I especially am turning my attention to other projects, but work is still planned to continue as fast as it can!

At first I explored a few more release dates with other people involved, but in the interest of full transparency, I didn't want to set another release date and have to cancel it again. I've been on both ends of that and it's never very fun when it's something you're passionate about, even when you 100% understand where the other party is coming from.

So I decided letting you know that we're working on it (and that we'll keep working on it) without giving a firm deadline that life could complicate was the best solution.

While you wait, I'll be releasing updates on a Patreon-exclusive blog for $5 donors starting next month, including looks at DCS's CGs I haven't shared anywhere (like the one attached to this post!) and advance samples of some of Nat's tracks. I've made a handful of backlog of posts on that blog already this month, a few of them AWOO-related, so there'll already be stuff waiting next month! You can also back DCS's Patreon for looks at different CGs and all their other excellent art, or just plain donate to Nat's moving fund to help support his ability to make music.

The reason I've decided to slow production is pretty simple: I, personally, am a freelancer without a steady job, and I can't afford to sustain a project of this scale as a full-time production anymore without seeking outside funding from other jobs. Working on AWOO before anything else, the way I've been doing since last May, pays almost nothing. And again, to be extremely transparent in a way I'm fortunate to be able to, my life is at a point where just going on like this with the hope it'll all pay off is less viable than I used to think it was.

And I'm only 23, but I've had medical problems since I was 15 that mean I can't put myself out on a limb or do any kind of real crunch; I always have to make sure I'm ready to face a relapse and I always have to be hyper-aware of exactly what my physical limits are. I'm sorry it's gotten in the way of AWOO when I really wanted to have it done and in your hands by now, but I know I also can't deliver anything if I'm bedridden or hospitalized again, so this is a decision I've had to make before it's too late.

I love working on AWOO and I especially love working with DCS and Nat on it -- I wouldn't have gotten this far if I hadn't had the generous support of my family, friends, and all of you. But taking a little bit of time to start finalizing my long-distance moving plans as I temporarily shifted my focus onto Love and Formaldehyde this month has made me realize that this is a necessary decision. Passion can carry you pretty far, and it's what brought me to both Nat and DCS in the first place, but it can't add more hours to the day where there aren't any or sell itself if there's nothing to sell.

For now, you can find my writing in Love and Formaldehyde (a brief demo is available now, and the full visual novel will be out before the end of the month), Tomai's scheduled stretch goal updates later this summer, and some smaller-scale commercial projects for both myself and other developers I'll be announcing here or over on Twitter when the time's right.

Thank you all so much for your understanding while we all wait a little longer, and for all of your support so far! I'm incredibly touched to have had the excitement you've all shown us over the past year. I hope the final product ends up being something you can all enjoy despite our delays.

wishing you good luck + good health! i also have medical issues that make game dev really difficult, so yeah people can understand what you're going through... you always have to make sure you're OK first! the game will happen when the time's right. good luck w/ everything!

Thanks so much for the support! ✩ We're gonna keep on trucking as best we can, but we definitely love the characters so much that we're not about to grind to a halt, haha.

(Good vibes for good health right back at you, too! It's definitely rough, but I'm looking forward to Tropical Depression Tendency whenever the time's right for you to release it!)

Well, I am still looking forward to it just as much as I was before, and am fine being patient for it.  No point in you putting yourself at risk for this project.  I will enjoy it just as much when it comes out, maybe even more ;)

Aw, I'm glad to hear that you might enjoy it even more with a wait, haha! Thanks for your patience and understanding; we're going to do our best to make sure the wait is definitely worth it!

I wanted to chime in on this and say how much I agree with the decision and was a part of the decision as well-- this is something Ivan and I took a lot of time thinking about before deciding to do.

I couldn't agree more with the decision to let AWOO have a looser deadline-- as it's very clear simply how much work the game needs from both Ivan and I to become the game we want it to be.

To talk more about it on my end and to be very frank: the regular CG's for a route take about a month and a half with my current workload; while the R-18 CG's take about 2+ months to complete. (Right now, I've finished all of the regular art for Davis' route-- but am still working thru the MASSIVE amount of R18 stuff.)

Which, please understand, IS A GREAT PROBLEM TO HAVE. Ivan has gone above and beyond to write some really fun sex scenes for the boys and I'm very excited to get to draw them. They just take a lot of time.

Not only that; but Ivan and I both have other jobs we have to do to sustain ourselves and each other while AWOO is in development. Ivan is not only paying me, but the musician as well! If you've ever tried to fund a game by yourself-- you know it's a LOT for one person to handle! It's just how these things go sometimes, ya know? And we appreciate ya'll helping us thru it.

Plus; the more time we spend with AWOO the more we are able to develop the characters and world, and honestly-- the more the both of us like it as we give it this extra time. AWOO is an awesome wolfy wine that is fermenting, mm-hm!

I work on AWOO once every week doing as much as I can, and I'm hoping once some personal problems of mine clear up I can work on it more than that each week too! But regardless; AWOO basically always gets worked on once a week. Slow and steady work gets done, rest assured!

So yeah-- waiting sucks, nobody likes it-- but we've already waited this long; I think we can wait a little longer!

Thanks for reading and sticking in there with us everyone!

Hey, I'm glad to hear you're taking a bit of a break on AWOO!

It's really important to take care of yourself. I love AWOO's demo and I'm sure I'll love the final release too, but it's not worth it to have it earlier if it comes at the expense of your health.

it's obvious y'all have been putting a TON of work into this game. The demo alone is bigger than a lot of indie VNs I've played. And the scope of the final game… five routes, ten endings, 70 CGs, two modes? That'd be a lot of work even for a large, paid team with multiple writers, artists and musicians, and you're working almost for free with just a group of three. It's completely understandable for you to prioritize getting outside funding. We all need to eat, after all.

Also, just to be clear, of COURSE the final product will end up being enjoyable. The demo is already so full of heart, and whenever any of you talk about the game it's clear how much thought and love is being put into it. Waiting a little longer isn't going to change any of that, and even if you end up needing to put an actual hiatus on this at some point, that'd be perfectly valid.

Good luck with everything!

Thanks for this reply -- speaking strictly for myself, it's already a huge load off my shoulders to be able to take this step back, and I know it'll only mean great things for the project's health and quality levels overall.

I'm also really glad to know the amount of work we do comes through, haha! It can feel a little difficult to not want to add more features and content, especially when something's been in production for as long as AWOO has and the areas we're working on tend to be slower ones, but we're making sure that the core content is as strong as it can be first. And it's great to hear that our love for the project comes through! We're all pretty passionate about it; DCS and Nat's ability to keep on trucking as best as they can is a huge part of what makes working on it as great as it is.

Basically, thanks so much for your understanding, haha! It's nice to know familiar faces that I've seen be excited about this project over its lifetime are willing to wait, so it means a lot to me that you commented. We'll keep doing our best over here with your support!